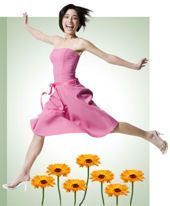 Down Regulation and Xenoestrogens (Foreign Estrogens)

Whenever the human body gets a continuous exposure to xenoestrogens, the human body tries to become less sensitive to the xenoestrogens. This effect is called "down regulation". When you take Natural Progesterone, the body REGAINS its original sensitivity to estrogen. Then, it seems like you are getting more estrogen when you are really not. Your sensitivity to estrogen just went up back up to normal. Thus, this is why women take Natural Progesterone for migraine headache relief and 30%-40% of these women patients will get worse. It is not the progesterone that is causing the headache. It is the regained normal estrogen sensitivity that is causing the menstrual migraine headache, NOT the progesterone itself.

Similarly, your estrogen load does not change. Your sensitivity to estrogen goes back to normal when you take progesterone.

So what is the solution? The solution is to cut out the xenoestrogens in your environment which is causing the estrogen dominance. Then, the success rate jumps up to above 90%.

I have women that do NOT want to change their soap, shampoo, laundry detergent, and make up. When they take the Natural Progesterone their menstrual migraine may get worse temporarily. This is because the women did not want to cut out their xenoestrogen load. The Xenoestrogen load is causing the premenstrual migraine. Sorry, there is no easy solution.

The question then becomes what are the xenoestrogens?

However, if the hormone is put on the skin 100 % goes directly into the body more or less and BYPASSES the liver.

Clinically, I have been treating estrogen dominant diseases that include menstrual migraines since 1999. Implausibly, I have found that laundry detergent, soap, shampoo, cosmetics, make up, and sunscreen makes a BIG difference on how my patients feel. The first patient that told me laundry detergent made a big difference, I thought she was loopy.

The patient was a paralegal. She had a fibroid with monthly flooding. She cut out xenoestrogens and took progesterone. The monthly flooding stopped for a year. Then she called me up complaining that she had mid monthly spotting. I asked her, "What did you change?" Sheepishly, she told me that she had changed her laundry detergent that she found at a health food store. That particular laundry detergent contained a phytoestrogen (plant estrogen) chamomile, and probably had given her the mid monthly spotting.

Another patient, tried to take natural progesterone for two years. Every time she took it, she experienced increased bloating and increased breast tenderness temporarily that stopped when she stopped the natural progesterone. Finally, after 2 years, she changed her laundry detergent to the one that I recommended, and her bloating and breast tenderness went away in a month. She was also finally able to take the Natural Progesterone and felt better.

So, if you do not cut out the xenoestrogens, then you are not cutting out a major factor that is the cause of the menstrual migraine.

The EPA (Environmental Protection Agency) was given a mandate by Congress to test for hormone disruption in chemicals back in 1996. The last I remember was that the EPA was 5-6 years behind because they could not figure a way to do it. Thus, the 100,000 chemicals in USA are NOT tested for hormone disruption. The bottom line is that no one knows.

A cursory look around any middle school in the USA shows that girls are maturing sexually quite quickly. The landmark 1997 Herman-Giddens study showed 15% of girls aged 8 sprouting breast buds and pubic hair. 5% of girls aged 5 are sprouting breast buds and pubic hair. This is known among medical doctors as precocious puberty. A TIME Magazine article dated Oct. 30 2000 cited recent scientific evidence of xenoestrogens in part causing precocious puberty.

What does precocious puberty have to do with you and your premenstrual migraine headache?

Precocious puberty proves that xenoestrogen effects are alive and well in the real world. The side effects that may be present when you overdose on synthetic estrogen is a migraine headache. This is found in any PDR (Physician's Desk Reference). See Here.

So why can't the same xenoestrogens that are causing precocious puberty be also causing your menstrual migraine headaches?

Trout were raised in an aquarium with clean water, and then put in cages in contaminated pools. The trout made 1000 times to 100,000 times more vitellogenin than the control trout kept in clean water.

So how do these sexually confused fish apply to you and your menstrual migraine headache?

Well, something in the water is causing the male trout to become female like. These same chemicals in the sewer that are going into the river come from your house or farm. These same chemicals are estrogenic and mimic estrogen. The same xenoestrogens may be contributing to your premenstrual migraine.

Why is this important? If you avoid these xenoestrogens, in your home, then you can prevent your menstrual migraine.

In July 2006, in the pediatric endocrinology conference in Denver, Clifford Bloch, MD presented a finding that lavender oil caused gynecomastia in young boys. Since the mid-1990s, Bloch, MD treated gynecomastia (man-boobs) in boys age 10 or younger. The boys had normal ratios of sex hormones measured in their blood. Thus, the boys did not have a problem with hormones produced by their body.

The boys stopped using lavender-containing products and the gynecomastia disappeared in several months.

"Lavender oil and tea tree oil have estrogenic and anti-androgenic properties," Henley flatly stated at the Endocrine Society meeting in Boston in July 2006. Henley believes he is the first to unequivocally finger "essential oils" from plants in gynecomastia by lab test.

So lavender oil and tea tree oil cause man boobs.

So just because it is Natural and from the health food store does not mean it is good for you. How can something that causes man boobs be good for you? It may be causing your premenstrual migraine to be worse.

By getting rid of fear and guilt, the histamine is NOT elevated, and serotonin is NOT decreased. Thus, the migraine headache goes away.

The Line of Reasoning

2. Too much estrogen (estrogen dominance) contributes to the cause of menstrual migraine headaches proved by side effects of synthetic estrogen pills.

7. These foreign estrogens may contribute to causing a menstrual migraine.

8. Guilt and fear simultaneously decrease serotonin and increase histamine manipulating the arteries in the head causing a migraine headache.

2. Avoid the xenoestrogens and phytoestrogens especially on the skin.

Suzanne's Book for You!

Just wanted to let you know that I am no longer having menstrual migraine headaches with my periods as I had reported to you last. I did purchase a bottle of butterbur as you recommended. I'm happy to say that I did not have to use it. I have had 3 periods over the past 3 months (much more regular than I've been in quite awhile, by the way) and I did not have even a hint of a menstrual migraine headache with any of them!

I have moved from the desert in eastern Washington to the west side of the state on the Long Beach peninsula. The reason for my move was because of my love to be near the Pacific Ocean. However, I am hoping that the environment will be healthier in regard to xenoestrogen exposure since I am no longer surrounded by farming and since there is an almost constant breeze of fresh ocean air!

Without a doubt, I will remain a faithful user of Natural Progesterone for menstrual migraine relief. Thank you again for all your help.

Menstrual Migraine NOT as Severe

I have used your progesterone for migraine headaches for two months and my symptoms are greatly improved. The breast cysts were gone after 3 weeks, but returned just before my period with much less force, then gone after 2 days, monthly bloating and mood swings is much improved, cramping is almost gone, periods went from 21 days to 25, and best of all my libido is back as strong as ever. My husband is as thankful as I am. My menstrual migraine is better, not as severe, but I am hoping they will soon be gone. They were so bad I had blood in my eyes and face afterwards. The first month after your product the menstrual migraine was barely there but lasted 2 days, the 2nd month I forgot and ate oregano and had a hard one but not near as bad as I have in the past, and my menstrual migaine was gone the next day.

I just ordered more and I am hoping things will continue to get better.

My 8 yr old daughter has been avoiding everything on your list, but so far there is no improvement. I got rid of everything beauty product wise, and I am trying to see that she gets the right foods, but with other people giving her things, when I'm not there, it's hard.

Thank you for your product, and the info for progesterone for migraine headaches.

I wanted to tell you how happy I am with Natural Progesterone for Migraine Headaches. I have been using it now for just over 2 months and I feel great. I originally started using it to lessen my menstrual migraine and it has really helped. If I get one, it is only one, and mild and goes away in about an hour or so. I'm hoping that they disappear completely as time goes on. Also, my periods are very regular which hasn't been the case for the past 2 years. Definitely the oil. No MONTHLY BLOATING AND MOOD SWINGS too!

I also want to tell you how nice it is to have a Dr. who actually responds to your emails and phone calls. You really sound sincere and take the time to explain everything. I've recommended the product to others who I'm sure will experience the same benefits as I have.